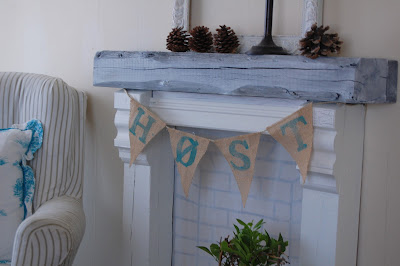 We have 5 kids and 5 bedrooms. Three large bedrooms, one medium and one small. After our latest addition to the family (babyboy) the small bedroom became nursery.
One of the large ones facing north east is our master bedroom. 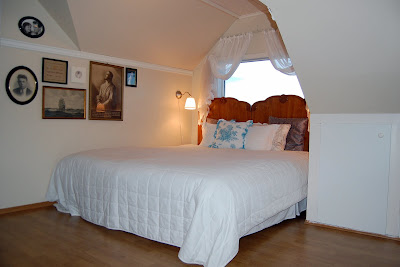 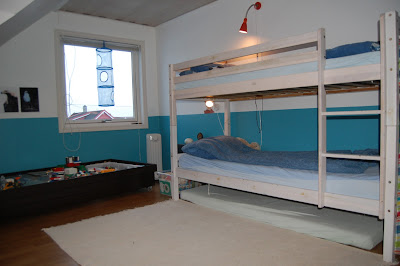 Now the thing is little princess hates to sleep alone. Most nights she ends up sleeping on a matrass in the boys room. And than "krølltopp" doesn't want to be all alone, so he drags his matrass into the other boys room too...

And now after more than a year of trying to convince them that having ones own room is very nice I gave in. They WANT to share rooms. OK.

Princess' room becomes playroom. All toys in there. One corner dolls, playkitchen, etc the other corner legos and matchbox cars...

Samwise and Jonny's room becomes familyroom. A cozy place to read, play games and for dad and the boys to watch soccer...

Nursery and master bedroom stay as they are.

Is this totally crazy?
Posted by Margitta at 14:40

With 6 kids and 5 bedrooms, we've used our rooms in unorthodox ways in each of our homes. In fact, in one home (5 bedrooms) all three girls slept in one room, so the two extras became a toy room and a craft room.

I say make your house work for your family :)

I don't think this is crazy at all. Take advantage of this situation while they are young. You are using your rooms to suit your families needs. Eventually they will get to a point where they will not want to share and you can go back to the way it was.

Sounds fabulous to me! We have four boys and three bedrooms. Right now, we have master bedroom, nursery, and three boys in the other bedroom. As soon as the baby is bigger, he will join his brothers in the big bedroom and the nursery will be a playroom. I love that the children want to sleep together! I hope you will post pictures of all the re-do's!

thanks for all encouraging comments ;)... I'll share pics further on... I have some ideas and started to paint some bed frames :)

If it works for your family, it's not crazy. Who says everything must be done "cookie cutter" way?

This is so funny! We are always switching around bedrooms here. I understand the quandry! In fact I was just telling my husband this morning (in a bit of a begging manner) that I would love to change all the bedrooms around. I have really good reasons of course! :) Hope this new plan works for you. It will for a while anyway. And then you can always change things again. :)

I think it sounds wonderful. And four beds in a row, sounds pretty beautiful to me. Love the idea of a dorm room style kids room. Maybe I should get more kids? haha, no!
But I have a visitor or two allmost every week end, as my daughter is in the "can I have a sleep over? Please, please, pretty please!"-age. So it would actually be a good idea to make her room into a friends dorm room. Like I have in the garden cabin.

Dorm room style sounds cozy... four bed's in a row is not possibble (though I like the idea), it'll be two beds and a bunk bed.

I think this is a wonderful idea - sleeping alone is very recent, and there is nothing better than being able to whisper together, and giggle, or just know there are other people there if you wake with a bad dream. Inspired, Margitta, go for it!

We have 5 children and 4 bedrooms. One is the master for us. My only daughter has her own room. My oldest son has his own room. The three younger boys have a large room with three beds in a row. They have a large closet that stores all their clothing and toys. It is great for siblings to share a room. Helps them to not be so selfish.